Welcome back to the 2nd EduLog Case Study!

Last we published the first of our pair of FormKeep use cases. In that, we examined the business and problems of a real estate broker, and discussed the ways in which FormKeep’s services could provide solutions. This week, our subject is the Educational Institution’s Administrator! The below discussion applies in varying degrees to administrators handling anything from Pre-Kindergarten to Post-Doctoral studies. However, I spoke mainly with those working at American High Schools.

No matter who, what, or where you’re administrating, your job description will boil down to the nearly impossible act of herding cats. This is especially true in an academic environment. To write this edulog I spoke with a number of people involved in Los Angeles area High Schools. I also outlined FormKeep’s capabilities and asked if they saw it as a value-add. Their responses? Just like last week’s brokers, an enthusiastic yes!

There are dozens of administrative roles to fill in a High School (Or any place of learning for that matter), especially as the student body grows. However, there is no more intensely an administrative role than that of the registrar.  The registrar manages all official records, enrollments, attendance, and information on every student within that institution. At smaller schools, the registrar can even have such duties as creating academic schedules and managing payroll. The office of the registrar can have anywhere from a single employee to dozens of administrators, depending on school size.

All of these varying responsibilities boil down to one thing: the creation, preservation, and organization of information. A task much easier said than done. And with such a task, of course, comes its difficulties.

There are plenty of ways for a registrar to carry out their duties, but most of them are wildly inefficient, especially in smaller, newer schools that have yet to fully develop SOPs. The opposite is true for larger, older schools: their staff is large and their antiquated SOPs predate their hiring. Both types of schools run into problems because of this.

Just because something “works” doesn’t mean it can’t be fixed. For example, I heard one tale of a school that had their students sign up for electives by writing their 1st, 2nd, and 3rd choices on a piece of paper and giving them to their homeroom teacher. Their teacher in turn handed the papers to the registrar who would, by themselves, craft classes and do all the data entry by hand.

Another less egregious yet still inefficient practice is that attendance taking. For example, one administrator said that their school had a front desk with forms for each grade, and students would have to write and sign their names every morning to prove their attendance. The employee manning the front desk would then manually type each entry and time into a spreadsheet to send to the registrar.

There are dozens of stories like this, stories of school-wide systems that “work”, yet eat up the immensely valuable time of underpaid, overworked school administrators. Imagine if, simultaneously, data entry errors, environmental waste, difficulty of use, and the wantonly abused time of the overworked, underpaid administrator could all be minimized to near zero?

The power of cloud-based, user-friendly software to make a workflow more efficient cannot be overstated. Problems like the pair above and innumerable ones that will be encountered in the future can be easily solved by products like FormKeep.

When it comes time for your students to choose their electives, don’t hand out blank pieces of paper, use FormKeep’s email campaign feature to send customized webforms to each student’s email address that only allows them to select classes that fit within their schedule. Then, export that data into a third party education solution like Gradelink or Blackbaud.

First, the student selects their preferred electives in a ranked list. 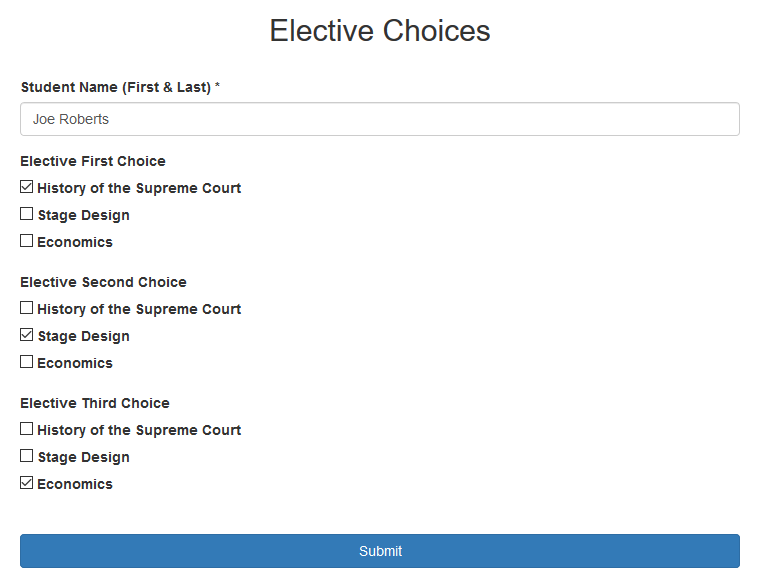 And here we see the administrator’s backend, a spreadsheet filled with submissions. This can be exported to a preferred LMS via .CSV, or piped directly from the submission. 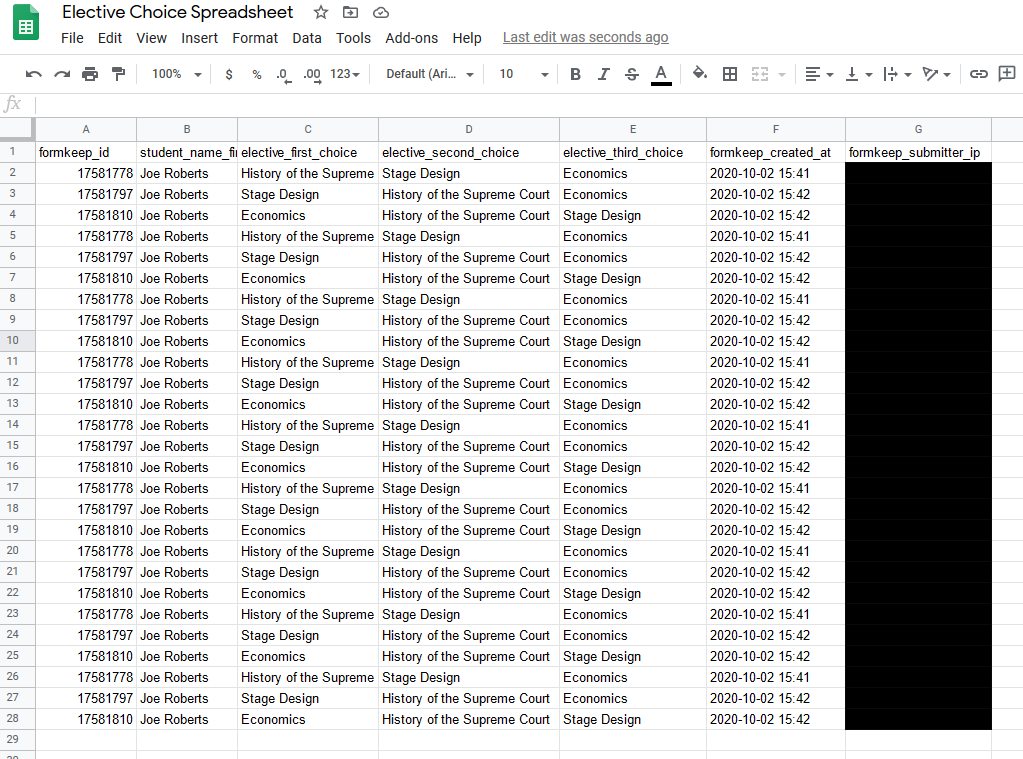 Every morning, instead of taking attendance with a stack of paper forms, have a tablet on a stand next to the front desk display a web form requesting name, grade, and signature. Then, have it send live updates to the relevant spreadsheet and add the time of sign-in automatically.

First, the arriving student fills out the attendance form on a tablet.

And here, again, we find the administrator’s backend. There are a number of strategies that can be used here, including making spreadsheets by day, by student, or by grade. As always, this information can be sent directly to an LMS instead of using G Sheets as a middle-man. 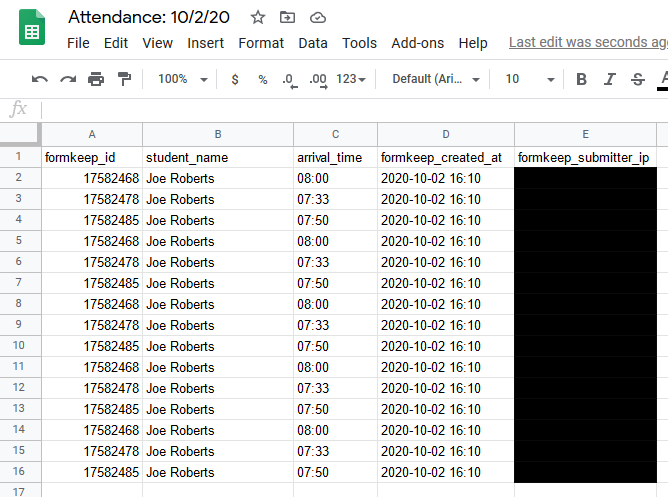 What’s the result of all of this? An easier experience for students, less wasted time for administrators, and fewer errors for end-users! And if you were wondering, it’s far from prohibitively expensive, in fact, a whole webform suite can cost less than a few textbooks a month.

All organizations deserve to be brought into the 21st century, schools more so than almost any other. And that doesn’t just mean a flashy squarespace site, or using Google Classroom. The improvements that matter the most are those that free up the time of administrators and educators so that they can better serve their students. Web forms are the best place to start. They’re cheap, incredibly versatile, and easy to use.

So, that concludes the second of our two EduLog Case Studies. I hope that learning how web forms can solve problems for both real estate brokers and school administrators helped your understanding of how FormKeep can apply to your specific use case. It sure widened my eyes and I hope it brought you a little closer to web form enlightenment. We’re six weeks through, and we only have one more to go.

Please join us next week for the final EduLog, where we return to our technical roots and learn about how Wistia can be integrated with FormKeep!